What is ATSA app and why should I use it? Print

Automated Telephonic Survey App (ATSA) offers you the ability to take your surveys from the phone directly to the cloud. Instead of conducting offline surveys, you can do the same over an IVR thereby saving you time, money, and operation costs. 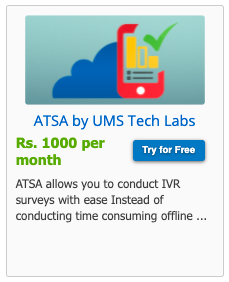 You can set up an online survey within minutes and get going. The app will receive calls on your behalf to record responses from the participants directly to the cloud. Even though the responses are stored on a cloud-based system, the participants of the survey need not be connected to the internet. The survey participants only have to pick up their phones and dial a number while the system records their responses over the phone.

Why you should use it: