How to use NEW Call Campaigns Print

The New Campaigns feature enables campaign managers to run Call Campaigns up to 5 Lakh contacts along with rich features like Dynamic greeting, Retry, Campaign level Reports, Campaign level Inbox, and marking an ongoing campaign as completed. A campaign manager can get all the information specific to a campaign in one place, like Campaign Details, Campaigns Stats and Campaign Calls. Additionally, New Campaigns has its own address book in the form of Lists and Contacts, where contacts can be added just by uploading a CSV of numbers and other details. Currently, it supports only call campaigns. Auto-Dialer and SMS Campaigns will soon be part of the new campaigns.

2. Retry Functionality - Dashboard campaigns support retry functionality up to a maximum of three retries - both in linear and exponential mode

4. Mark As Completed - Any ongoing campaign can be marked as completed and the remaining numbers in the list will not be dialed out. A campaign should be first paused in order to mark it as completed. Reports will be available for such completed campaigns

7. Parity between Campaign Dashboard & API: Dashboard Campaigns and Campaigns API have got features and platform parity. Hence, any campaign, contact, or list created using APIs can be fetched from the dashboard and vice-versa.

In order to create a new call campaign, follow these steps:

On the New Campaigns landing page, it shows the summary of all the call campaigns. Whenever a new call campaign is created the campaign starts appearing in this list. 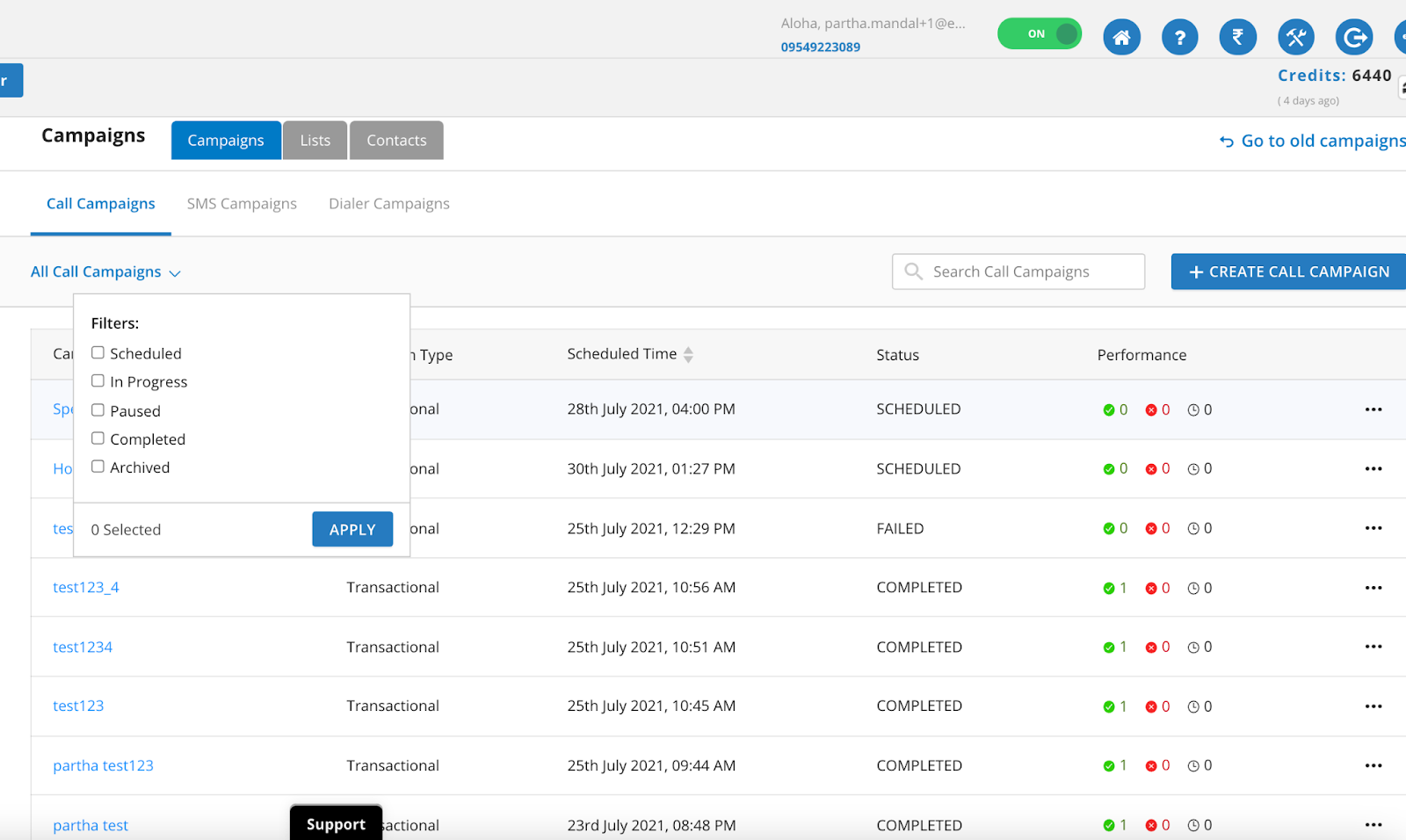 Clicking on the Individual Campaign will take the users to the campaign summary/stats page. The action can be changed from this page as well. The entire page is divided into two sections. On the top users can see the campaign details along with stats and at the bottom user's can view the call details of that specific campaign. 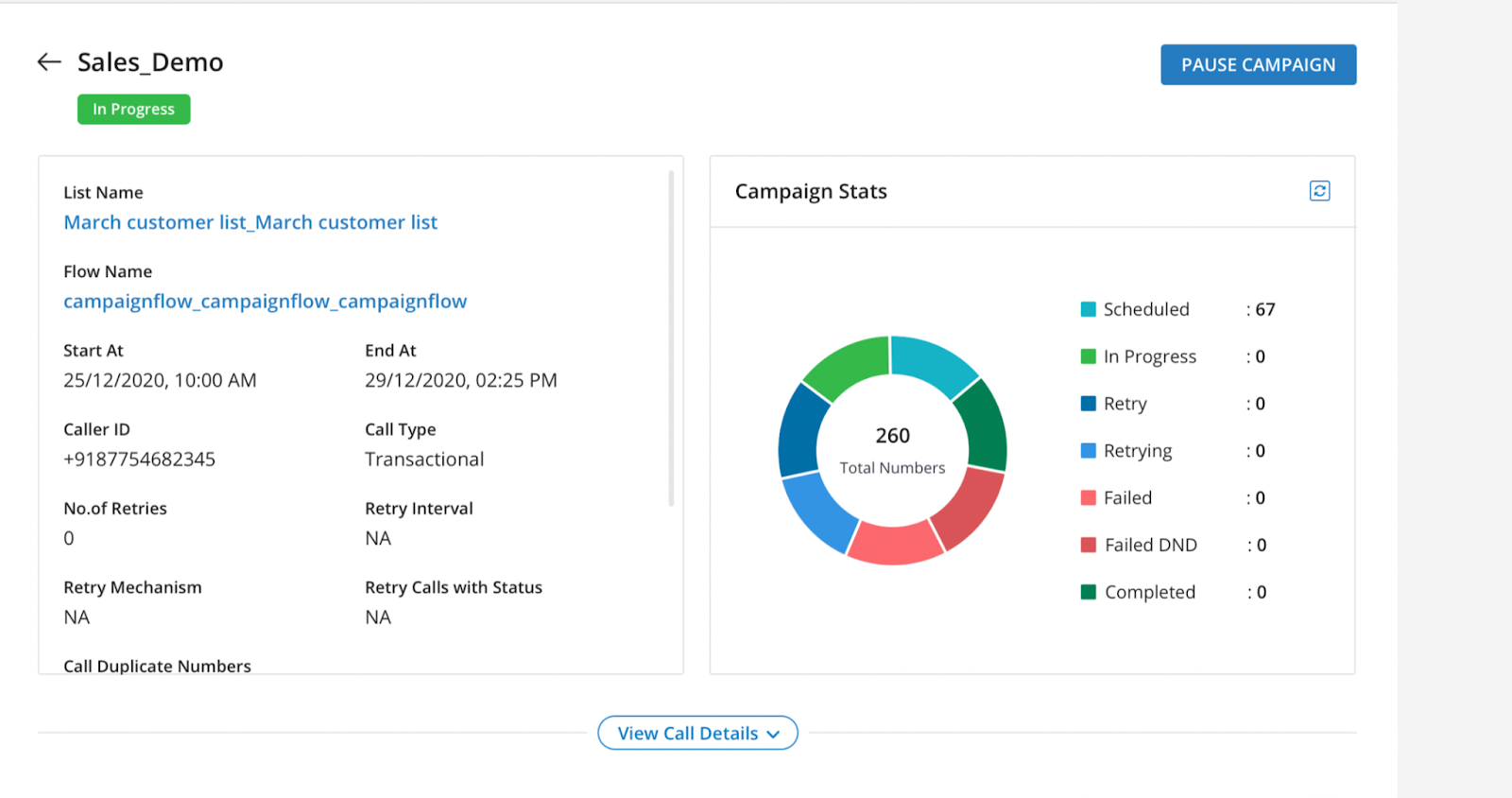 This section shows the list of calls that are made as a part of the campaign. It captures call details such as contact person name (if added in Contacts), date created, call status, call duration, DTMF selection and call recording. It also has an action menu that shows more details about the call such as call start time, call end time, call direction and call sid. 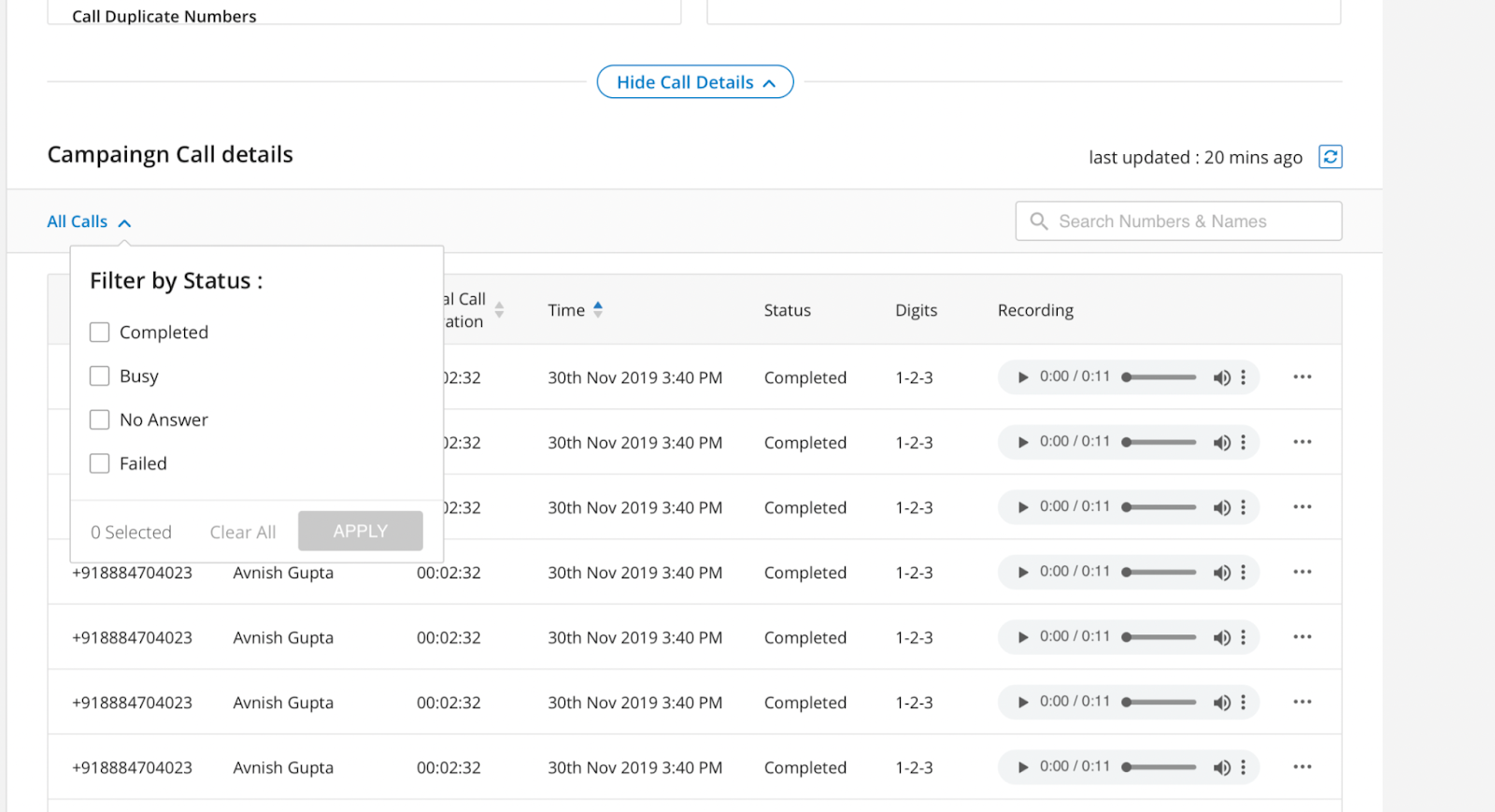 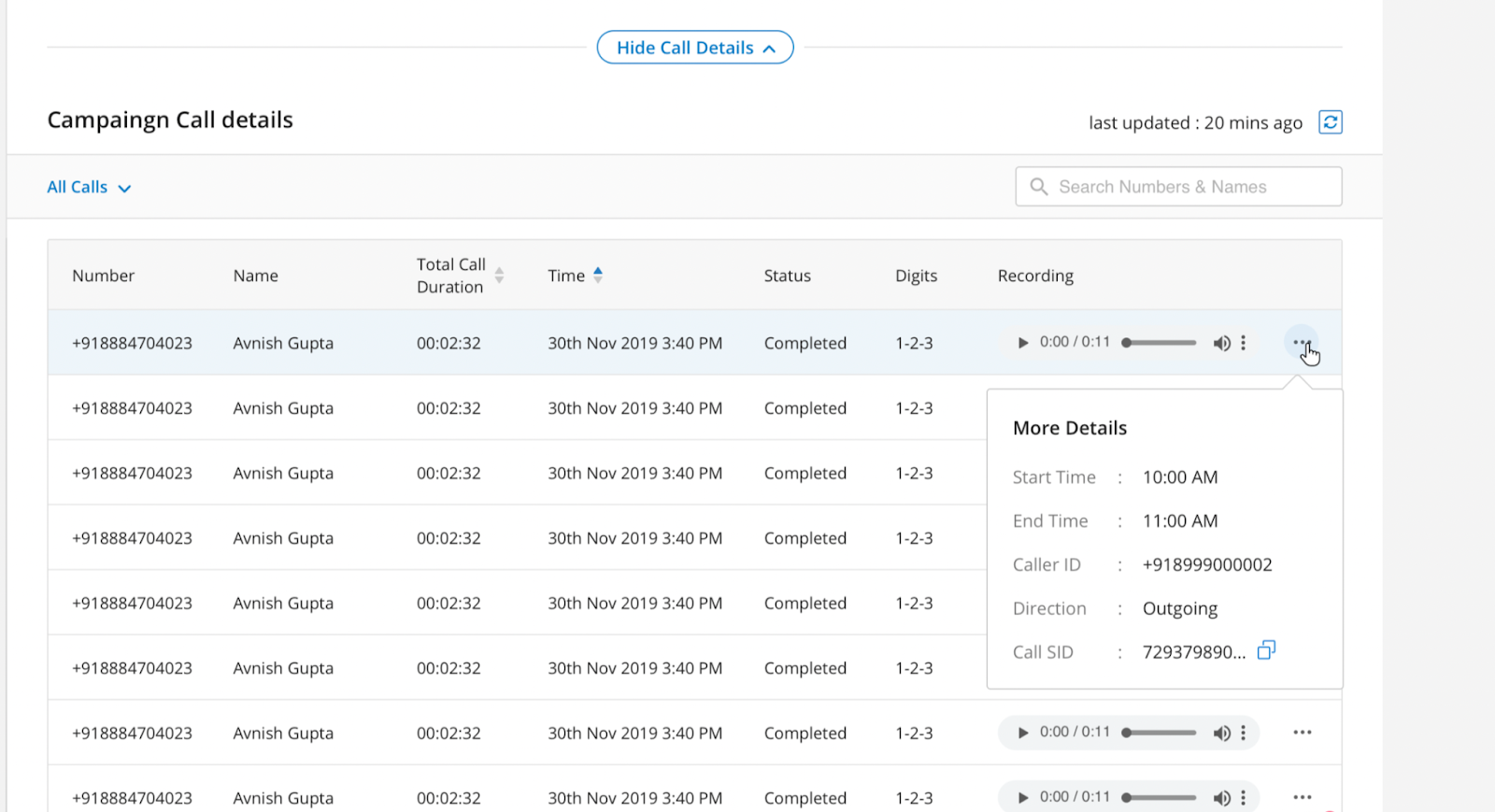 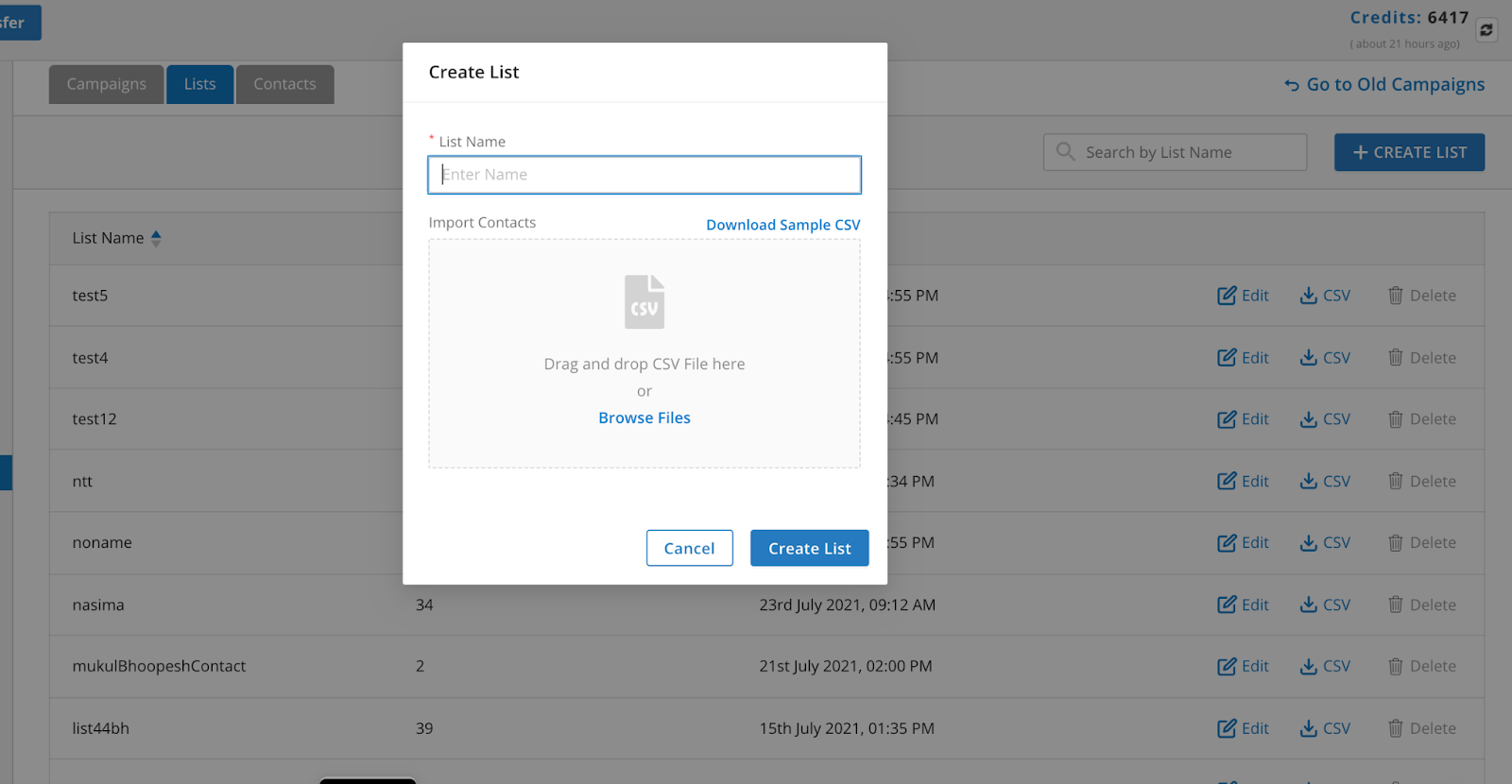 Lists that are created as a part of Campaigns will appear here. 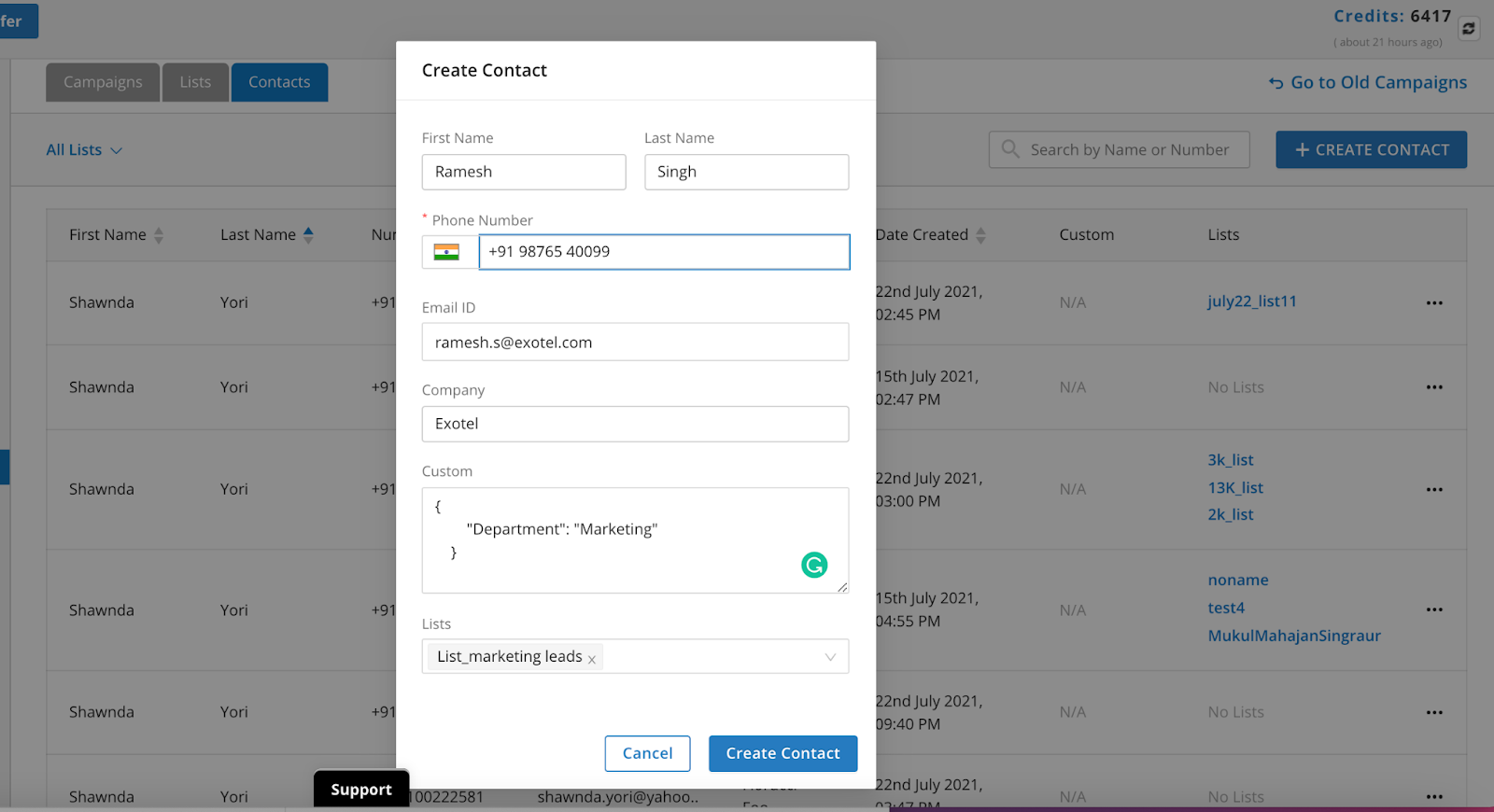 Contacts that are created as a part of Create Contacts will appear here. Also, if a List is created with a CSV file, all the contacts of the CSV file will appear in the Contact list. Contacts  (contacts that are part of multiple lists) will not be duplicated and the Number is always unique for a contact. 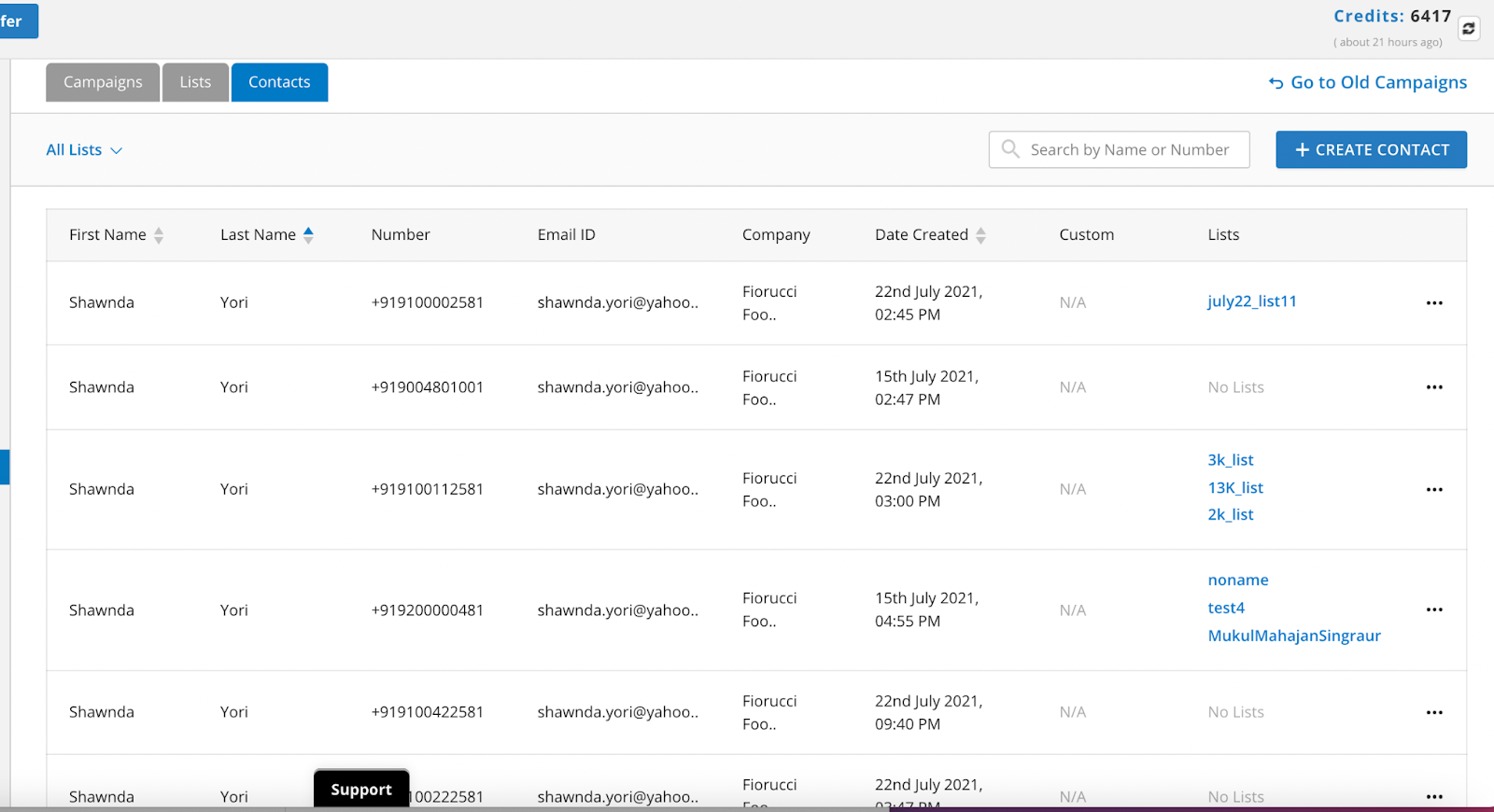 Default Call Capacity: By default call capacity of the campaign is 60 calls per minute. If you want to increase the capacity (fast calling), you have to raise a request to increase it.